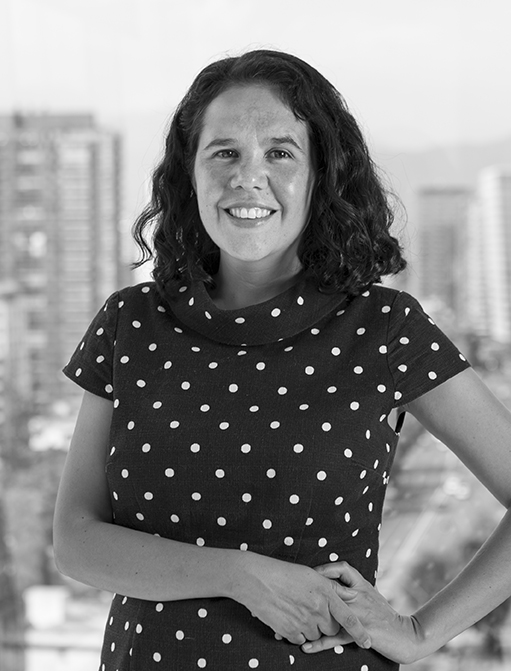 She initiated her professional practice as an associate attorney at Álvarez, Hinzpeter & Jana Abogados (2006-2008) and, afterwards, being part of the litigation and arbitration team at Bofill Mir & Álvarez Jana (2009-2012). Later she joined the judicial team at Del Río y Parraguez, Estudio Juan Agustín Figueroa (2012-2016), where she became a partner, position she maintained after the merger with Marín y Cía., that resulted in the formation of Parraguez y Marín.

She was a fellow to a Fondecyt Project regarding an Economic Analysis of Administrative Law, specifically related to an investigation on what would be the optimal fine for illegal extraction of groundwater (2016-2017).

She has participated in the representation of the interests of a mining company in the context of a dispute with a group of more than 400 fishermen, for an amount of approx. USD $33.000.000.
She has represented the interests of Molinera del Sur S.A., against Empresas Copec, in a lawsuit regarding a very serious case of oil contamination on a hill the center of Puerto Montt.
She has represented Minera Escondida in an arbitration against Codelco, regarding the robbery of copper concentrate, for an amount of USD $10.000.000.
She has participated in the representation of the interests of a company dedicated to explosives in a civil judicial process related to an alleged breach of contract and in an unfair competition process, for an amount of approx. USD $2.000.000.
She has represented Concesiones Recoleta S.A. in the conflict against the Municipality of Recoleta, regarding the unilateral termination of the concession contract for surface and underground parking in the Recoleta district, for an amount of approx. USD $20.000.000.
She has represented one of the parties in a conflict regarding the restructuring of family assets, by defending his client in several civil actions regarding interdiction for insanity, simulation and nullity, profit of the deceit of others, absolute nullity of transfer of rights and non-enforceability of transfer of rights. Likewise, she has participated in the defense of lawsuits filed in the United States of America and in the defense of criminal actions related to embezzlement, fraud, forgery and misuse of fraudulent documents, tax-related crimes, among other actions.
She has represented a pension fund company in civil and administrative procedures which object has been to cancel a corporate reorganization.
She represented a pig slaughter company in several judicial processes initiated by pig supplying companies, regarding to a conflict generated by the seizures of meats that contained dioxins at levels higher than those allowed in the destination markets.
She represented a construction company in an international arbitration process ruled by the ICC regulation, regarding the reimbursement of alleged cost overruns, additional expenses, fines and interest for approx. USD $40.000.000 in the context of the construction of an electrical substation.
She represented the Chilean Economic Development Agency (CORFO) in several claims regarding the restitution of the money obtained by profiting of the deceit of others, against fundraisers, in the context of the financial run experienced by the Inverlink Business Group.
(Español) Representó a la Corporación de Fomento de la Producción (Corfo) en una serie de acciones de restitución del provecho del dolo ajeno, presentada ante los tribunales civiles ordinarios, en contra de los rescatistas de los fondos en el contexto de la corrida financiera sufrida por el Grupo Empresarial Inverlink.

She was a fellow to a Fondecyt Project regarding an Economic Analysis of Administrative Law, specifically related to an investigation on what would be the optimal fine for illegal extraction of groundwater (2016-2017)

She runs a Literature club