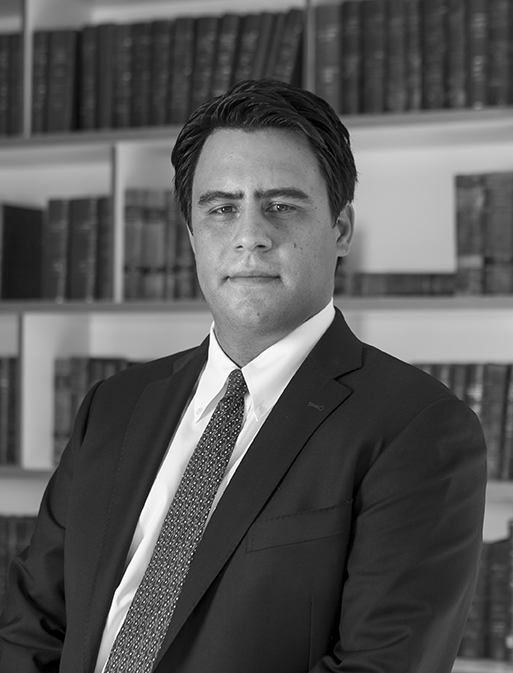 He holds a Diploma in Accounting and Financial Analysis, awarded by the Universidad de Chile’s Economy and Businesses School (2014).

He initiated his professional practice as an associate attorney at Álvarez, Hinzpeter & Jana Abogados (2006-2009) and, afterwards, being part of the litigation and arbitration team at Bofill Mir & Álvarez Jana (2011-2012). Later he joined the judicial team at Del Río y Parraguez, Estudio Juan Agustín Figueroa (2012-2016), where he became a partner, position he maintained after the merger with Marín y Cía., that resulted in the formation of Parraguez y Marín.

He has represented one of the parties in a conflict regarding the restructuring of family assets, by defending his client in several civil actions regarding interdiction for insanity, simulation and nullity, profit of the deceit of others, absolute nullity of transfer of rights and non-enforceability of transfer of rights. Likewise, he has participated in the defense of lawsuits filed in the United States of America and in the defense of criminal actions related to embezzlement, fraud, forgery and misuse of fraudulent documents, tax-related crimes, among other actions.
He has represented a pension fund company in administrative procedures which object has been to cancel a corporate reorganization.
He has represented a pension fund company in actions initiated by a Senator and a Deputy of the Republic of Chile, that aim to cancel a corporate reorganization.
He represented a telecommunications company before the Tribunal for the Defense of Free Competition and before the Supreme Court, regarding unfair competition and antitrust matters.
He represented a construction company in an international arbitration process ruled by the ICC regulation, regarding the reimbursement of alleged cost overruns, additional expenses, fines and interest for approx. USD $40.000.000 in the context of the construction of an electrical substation.
He represented a real estate company in a lawsuit for construction failures, for an amount of over USD $2.000.000.
He represented a mining company in the defense of an invalidation process of an Environmental Qualification Resolution, linked to a modification of the mining exploitation project; in the defense of various complaints of new constructions; in the filing of a constitutional protection action for the interruption of the installation of transmission lines, among others.
He has represented Concesiones Recoleta S.A. in the conflict against the Municipality of Recoleta, regarding the unilateral termination of the concession contract for surface and underground parking in the Recoleta district, for an amount of approx. USD $20.000.000.

Diploma in Accounting and Financial Analysis

His experience has been recognized by Leaders League